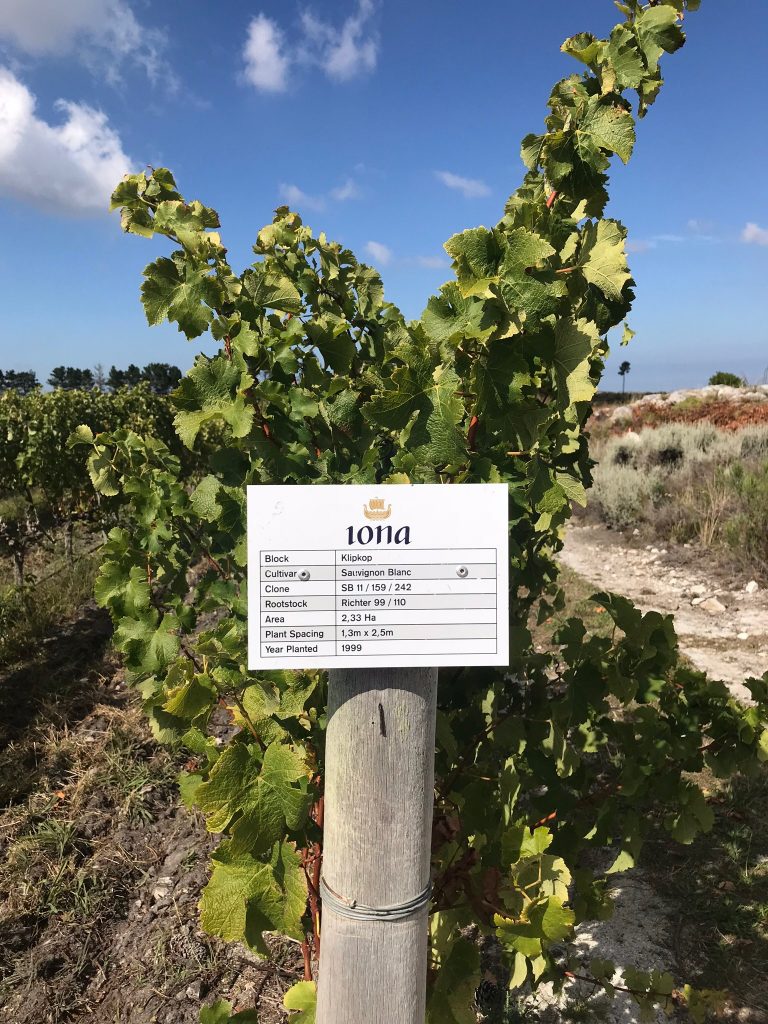 A recent update from our good friends Andrew and Rozy Gunn at Iona Wines, Elgin

Anyone who can tell me that this season was an easy one in terms of farming please show me where you parked your spaceship.

Basically the fun and games began with an unprecedented warm spell in July  which foxed Chardonnay out of bed early ready to bud.  It was like trying to explain jet lag to a toddler.  Impossible to put back to sleep and when it did doze off again, surfaced  in September like a grumpy teenager who’d possibly got stuck into the drinks cabinet the night before.  So the Three Wise Men (Werner, Bobby and Jaco to us) were already in tête-à-tête mode long before Spring had officially sprung.

We then had unprecedented (my new favourite word) frost at the end of September at Iona which was a rude slap to any over enthusiastic buds which had been misled by the false wake up call in July  The result was a lot of unevenness in the vineyard and to add insult to injury we had a cool, damp Spring which affected set on Shiraz and Chardonnay in particular but everything in general, leading to low yields all round.  If small is beautiful we can certainly look forward to spectacular this year.

It’s funny how a bit of hardship gets one digging deep.  Probably the best thing about this past season is how, as a team, we have met more often, questioned our farming practices more acutely and generally rallied to further our quest for excellence in the vineyard, the cellar and in the market place.  And so typical of farming where after 20 years you realise how much still needs to be done and here’s the thing – sustainability requires sustaining. To farm without chemicals or herbicides doesn’t only mean getting rid of them – it means replacing them with a lot of proper old fashioned farming practices which take years to really show significant results – the sowing of more diverse seed for cover crops; more slashing and skoffeling of weeds by hand;  more breaking up of vine berms (the soil immediately below the vine) by hand due to the rutting effect created by mechanical equipment such as tractors and mowers and ploughs;  and manually carrying in compost and depositing it under each vine.  And that was all just to tend to the soil.

Unless you’ve been snoozing under a stone, you are probably well aware of the international debacle between Monsanto and Bayer with regards to the use and side-effects  of glysophate (the main ingredient in modern herbicides). The whole chemical catastrophe started around the end of the Second World War – the Military-Industrial complex needed new markets for its surplus chemicals and so the Agricultural-Industrial complex was born.  No small irony in the fact that we’ve taken chemicals so adept at annihilating the enemy and used them against our food (No judgement here – I was taught the road to hell is paved with good intentions).  But my real point is that it’s been a mere 70 odd years of radically altered farming practices – think fertilisers, herbicides, fungicides, ameliorants and pesticides – which led to subsidised grain farming in the USA which made intensive grain-fed stock farming possible, which made eating meat every day possible. The result being that we have mortgaged the small diverse producer, our soil and our health for a vast globalised distribution network controlled by multinational corporations which separate us from our food source, seductively justified by the “Get More For Less” mantra.  And let’s face it, you can’t get more for less unless you’re screwing someone or something!  Some of the current downsides – toxic oceans, water, air and food  – probably represent only a fraction of the actual damage being done.  I am of the opinion that the need to abandon chemical fertilisers/herbicides and pesticides is more urgent than ever.

So before we all go and jump off a cliff , one can at least take charge of one’s own backyard.  Here at Iona and Brocha we are currently skoffeling 6.1 hectares by hand.  My logic, which by my own admission can be spectacularly impractical and uneconomical, was that I would rather put money into our workers’ pockets than those of the chemical companies.  In a nutshell, what this has revealed is that it is sadly not sustainable on three properties such as ours; the labour costs would put us out of business. BUT, and it’s a really big BUT,  the difference in soil health and vine resiliance is simply astonishing, and we’ve had three dry years in a row to really test these vineyards.  The pH and acidity levels are some of the best we’ve ever had in the wines from these blocks, significant in a year where pH and acid levels perplexed winemakers almost without exception, which for me is the proof of the pudding,  because while what we do in the vineyards must reflect our farming philosophy of treading lightly on this planet, this effort must also be reflected in an increased quality in our wines.  So the lesson taken is that in addition to using biological and organically registered sprays, we need to mechanise weeding where possible (on our flatter, more earthy vineyards) and limit hand-hoeing to the stoniest and steepest slopes – not exactly what we originally hoped for but without doubt the route we must and have to take.  (Folk who have been farming organically and biodynamically for years must think we are incredibly dull witted….. I know!)  It’s a mindset – a bit like getting married for the first time – once you take the plunge it’s actually quite relaxing – and you have no idea why you resisted for so long.  End of lecture.